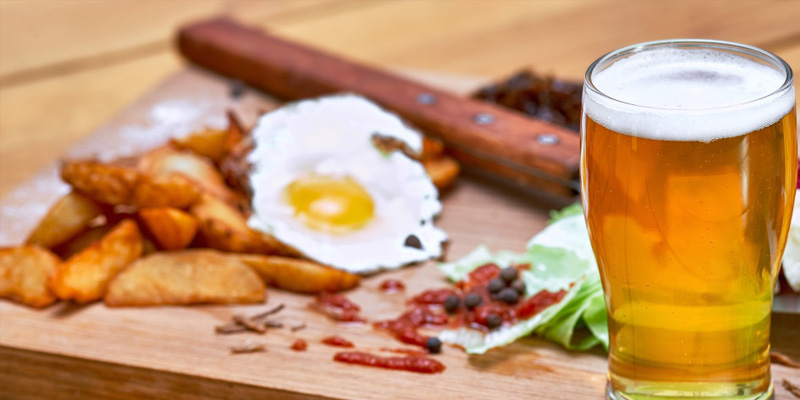 Beer for Breakfast? Inside the Boozy Brunch Revolution

Beer for breakfast isn’t anything new. In 1970’s “Sunday Morning Comin’ Down,” Johnny Cash gives a shout-out to the ritual, singing, “Well I woke up Sunday morning / With no way to hold my head that didn’t hurt / And the beer I had for breakfast wasn’t bad / So I had one more for dessert.” By the next decade, Paul Westerberg was professing his love more succinctly in the Replacements’ aptly titled dirtbag anthem, “Beer for Breakfast”: “All I want to do is drink beer for breakfast / All I want to do is eat them barbecue chips.” The jury’s still out on whether or not Lay’s Kettle Cooked Mesquites are a suitable swap for hash browns and home fries, but in recent years, Americans have started to come around to Westerberg’s thinking. What was once a pastime employed primarily by tailgating college kids and touring musicians is now an option embraced by eaters and drinkers of all ilk. Beer for breakfast and brunch has officially arrived. "In the last few years, we’ve been seeing the trend more and more,” says Julia Herz, craft beer program director for the Brewers Association. “With the full-flavored beer movement happening in the United State, there are so many more choices beyond American lagers, and so the brunch-pairing options are incredible.” It’s tough to pinpoint the first breakfast-themed beer, but most experts cite Founders Brewing Co.’s Breakfast Stout as the O.G. The legend: In the early 2000s, Founders’, uh, founder Dave Engbers ate a chocolate espresso bean and washed it down with one of his porters, accidentally giving birth to a much-beloved coffee imperial stout. Around the same time, Terrapin released its equally adored Wake-n-Bake, a coffee oatmeal imperial stout. But these breweries didn’t explicitly design their beers to be consumed for breakfast. “It was more about the fact that coffee is traditionally a breakfast beverage, and it pairs exceedingly well with the big, dark, roasty, rich grains in imperial stouts,” says Matt Simpson, a certified beer sommelier and consultant. Somewhere along the way, breweries began hosting release events in the morning where they served up their signature suds next to morning staples. Eventually, inspiration struck. “That’s when everyone realized that other beer flavor profiles lend themselves to breakfast foods really well,” Simpson says. Bright, crispy, tart beers like goses and Berliner Weisses, for example, pair perfectly with fruits. The market soon after became swarmed with novelty breakfast-themed brews, from cans that complement Pop-Tarts (21st Amendment’s Toaster Pastry) to bottles that go best with bacon (Funky Buddha’s Morning Wood). Sam Calagione and the mad scientists at Dogfish Head even concocted the complex Beer for Breakfast, a stout brewed with maple syrup, chicory, cold press coffee and the mysterious Mid-Atlantic delicacy scrapple. Yet restaurants have been slow to actually serve brews at brunch. That doesn’t make sense to Lorenzo Borghese, cofounder of the new South Beach Brewing Company in Miami, which opens this fall. “I’ve always liked to have a beer with brunch,” Borghese says. “Think about it: Beer is refreshing, and it’s easy to drink in the morning. I can maybe have one mimosa or bloody Mary before it gets too acidic and tough on my stomach. But beer has the carbs and energy you need, and you can have a few beers as opposed to just one cocktail with brunch.” Adds Herz, “If you’re going to partake in an alcoholic tipple in the morning, you stand a better chance if it’s lower in alcohol. And that’s where beer has so much more game over wine and spirits. It’s the beverage of moderation.”” After surveying the industry and noticing a gaping hole where a beer brunch concept should be, Borghese hatched an idea: What about an exclusively brunch-themed brewery? “I felt this was something that was really missing,” he says. “So if it wasn’t available, why not create it?” Borghese first kicked the tires in Brooklyn, but after a business agreement fell through, he headed south to Florida to try his luck there. He quickly linked up with Fred Forsley, the president and founder of Maine’s Shipyard and Sea Dog breweries, and began developing SBBC’s flagship trio of beers. There’s South Peach Shandy, brewed with real peach juice and electrolytes derived from coconuts; Sunset Blood Orange, a sessionable IPA with real Florida orange juice; and Strawberry Orange Mimosa, which is also brewed with O.J. Sea Dog will handle the bulk of the brewing in Clearwater, while Borghese will run point at SBBC’s 2,200-square foot, two-barrel brewpub in South Beach. The brewery officially opens in November, but kicks things off with a pool launch party at the Kimpton Surfcomber Hotel on October 14. Obviously, the shindig will be held during brunch. Borghese wouldn’t have it any other way. “Why do breweries offer beers that are only good for two out of the three meals of the day?” he asks. "That’s a third of the market they’re missing. And on the weekends, brunch becomes 50 percent of the market. So we really need to start focusing there, because a Saturday or Sunday morning brunch is essentially the weekend version of happy hour.” Herz agrees. “We have yet to see beer fully be embraced at brunch, and that’s a missed opportunity,” she says. “But as beer gets a bigger place at the table, and not just as a side to the meal, brunch is really the natural next place you’re going to start to see it pop up.” We’ll drink to that—just as soon as you pass the bacon.